Accident between Motorcycle and Tractor-Trailer Results in Serious Injuries 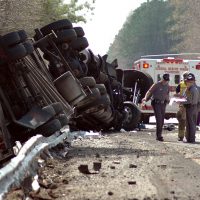 An Orange County accident between a semi-truck and a motorcycle has resulted in injuries to both persons riding on the motorcycle, with one of the riders’ injuries being deemed serious by emergency personnel. The accident is an example of the dangers of speeding trucks, as well as the vulnerability of motorcycles on the road.

The accident occurred on Sunday, April 9, 2017, at around 5:00 pm, along Neelytown Road in Maybrook. According to witness reports, a tractor-trailer was traveling at a high rate of speed when the crash occurred. Police responding to the accident explained that the tractor-trailer pulled out, which resulted in the motorcycle striking the truck. The driver and passenger of the motorcycle were both injured in the collision, one suffering serious injuries in the crash.

Most drivers think of motorcycles as being easily maneuvered and more equipped to avoid collisions than other types of vehicles. While it is largely true that motorcycles’ small frames and ability to quickly accelerate can make them more adept at avoiding crashes, there are certain types of accidents that are more likely to cause serious or fatal injuries among motorcycle riders than among passenger vehicle occupants.

Tractor-trailers are exceptionally difficult to bring to a stop. In fact, a loaded semi-truck may need as much as 600 feet to come to a stop once the driver recognizes a hazard in the road. This makes it even more dangerous for these massive vehicles to travel above the speed limit than when passenger vehicles speed.

If you’ve been injured in a motorcycle accident in the Hudson Valley, contact the dedicated and experienced Goshen personal injury lawyers at Dupée & Monroe for a consultation, at 845-294-8900.