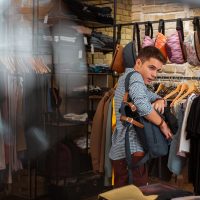 How Does New York Punish Shoplifting?

In New York, if you are caught shoplifting small amounts, you could be charged with either Petit Larceny (Penal Law 155.25), or Criminal Possession of Stolen Property in the Fifth Degree (Penal Law 165.40).

To obtain a conviction for Fifth Degree Possession of Stolen Property, the prosecution must prove the defendant possessed property they knew to be stolen and intended to keep it from the owner or otherwise benefit from that possession. There is no minimum value of property to trigger liability under NY PL 165.40. If the defendant is caught with property of a greater value, however, they could be charged with a more serious crime, meaning a higher “degree” of the crime. Section 165.40 is commonly used for shoplifting arrests.

Both Petit Larceny and Fifth Degree Criminal Possession of Stolen Property are class A misdemeanors, punishable by up to $1,000 in fines and up to a year in jail. If the defendant stole more than $1,000 in cash or goods, they can be charged with more serious crimes, including felony larceny or felony possession of stolen property. The defendant may also be liable in civil court to the merchant from whom they shoplifted, including for the value of the stolen property and additional penalties.

Avoiding the Worst Consequences of a Shoplifting Conviction

Defendants charged with either shoplifting crime can avoid the worst consequences with help from a savvy defense attorney. The prosecution’s case may be flimsy, based only on the word of an alleged eyewitness or poor-quality security camera footage. It may be difficult to prove whether the defendant was the person who committed the offense, whether they actually stole property, or if they were caught while still in the store, whether they actually intended to steal the property or pay for it.

Even if the government believes the defendant is guilty and has the evidence to prove it, they might not face jail time. Prosecutors are often willing to negotiate plea deals with first-time offenders charged with non-violent misdemeanors, including shoplifting.

First-time and other petty offenders may qualify for a diversion program. A diversion program allows the defendant to comply with certain conditions, such as counseling and community service, rather than face incarceration. Upon successful completion of the program, the charges will be dropped, and the defendant will not have a criminal record.

Even absent a diversion program, the prosecution can often be convinced to negotiate a plea to the lowest charges possible and recommend probation, community service, and other alternatives to jail time.

If you have been arrested for shoplifting, petty theft, or other criminal offenses in New York, call Dupée & Monroe, P.C., to get help from a seasoned criminal defense lawyer. From our offices in Goshen, we represent clients charged with all manner of criminal offenses in Orange County and throughout the Hudson Valley.