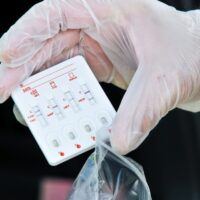 When a driver is pulled over for a potential moving violation in New York, the police may ask to conduct a field sobriety test. The officer is also likely to request a breathalyzer or other chemical test to determine the driver’s blood-alcohol content (BAC). Drivers who worry that they may test over the limit for alcohol might be thinking about refusing the test to avoid giving the cops hard evidence to use against them. Unfortunately, there are significant consequences under New York law for refusing to take a chemical test. To learn about refusing a chemical test in New York, read on. If you’ve been arrested for DWI in New York City or the Hudson Valley, call a dedicated New York DWI/DWAI defense attorney.

When you operate a motor vehicle in New York, you are giving “implied consent” to DWI chemical testing, typically either blood or breath testing. An officer who has reasonable grounds to believe that a person was driving while impaired (or that a driver under age 21 has consumed any alcohol) can request that the driver submits to one or more chemical tests. The results of those tests can be used against a driver in a criminal proceeding.

Drivers cannot be physically forced to take the tests, however, without a warrant from a judge. Drivers can choose to refuse the test. Refusing to take a chemical test is, however, a civil violation, entirely separate from any eventual DWI proceeding. The officer will inform the DMV of the refusal, and the DMV will then hold an administrative hearing to adjudicate the refusal. If the refusal is proven, and no adequate defense is provided, the driver will be subject to significant civil consequences.

An adult driver who refuses to take a chemical test faces penalties including:

Repeat offenders could be subjected to additional penalties. A driver who has had a chemical test refusal or driving-related alcohol or drug conviction within the prior five years may face:

The court can also require evidence of alcohol evaluation or rehabilitation before reinstating the driver’s license.

Should You Refuse the Chemical Test?

Despite the penalties for refusal, there may be good reason to do so. If a driver is facing felony DWI charges, or if there has been a traffic accident involving serious injury or death, a driver should refuse the test. The potential consequences of a criminal conviction are far more severe than any penalties for chemical test refusal. Drivers may also refuse to take a test without consequence if they have a medical condition that would be affected by a BAC test (such as a respiratory condition that would prevent them from blowing effectively).

Moreover, drivers are entitled to (a) an accurate explanation of the consequences of refusing the test from the police officers, and (b) the right to consult with an attorney before submitting to the BAC test. If the police refuse to explain the consequences and/or do not give the driver the chance to call a lawyer, the chemical test refusal may be tossed out. There may be other circumstances justifying a chemical test refusal as well. Talk to a knowledgeable DWI attorney for advice.

If you have been arrested or charged with a misdemeanor or felony in New York, call Dupée & Monroe, P.C., to get help from a dedicated and passionate criminal defense lawyer. From our offices in Goshen, we represent clients charged with all manner of criminal offenses in Orange County and throughout the Hudson Valley.