Consequences of Using Your Cell Phone While Driving in NY 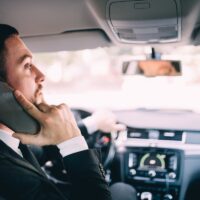 New York is no exception to the dangers of distracted driving: In 2018, 278 reported traffic deaths involved cell phone use as a contributing factor. The 2018 figure represents a staggering 18% increase from 2014.

Texting While Driving Is Illegal in New York

In an effort to combat the dangers of cell phone use while driving, nearly every state has passed some sort of ban on handheld use of phones while driving. New York law prohibits drivers from using a handheld mobile device, including any phone or other electronic device, while operating a motor vehicle. Drivers cannot hold a device and talk, compose/read/send texts, emails, or other communications, access/read/transmit/save other electronic data such as web browsing, view or take photos/videos, or play games. The only exception applies when the use of a cell phone is necessary in an emergency to, for example, call 911.

New York drivers may only use hands-free devices while driving. Drivers who use hand-held devices while driving will face fines that escalate after multiple offenses, and they will see points added to their driving record. With enough points, a driver’s license can be suspended.

Drivers Who Use Their Phones Are Liable for Accidents They Cause

Using a cell phone while driving is illegal for a reason–it’s dangerous, and it greatly increases the risk of an accident. If you are seriously injured in an accident with a driver who was texting just before or at the time of the crash, you have the right to seek compensation. Obtaining compensation requires proving the other driver was at fault, typically by way of showing that they were negligent.

At-fault drivers who are found to be negligent in a crash can be held liable for the damages caused by their actions, including medical bills, pain and suffering, and other harm suffered by accident victims. Negligence can be proven in several ways, but one of the strongest arguments for negligence is demonstrating that the defendant was violating an established driver safety law. Texting while driving is known to be dangerous, and it is explicitly prohibited by law. Proving that the other driver was using their phone while driving is strong evidence that they were negligent and that that negligence directly caused the accident–meaning they were at fault.

If You’ve Been Injured in a Distracted Driving Accident, Dupée & Monroe Is Here to Help

If you need help getting medical treatment and compensation for the harm you \suffered after a serious accident caused by a distracted driver, or if you are pursuing another negligence-based claim in New York, contact the passionate and trial-ready Goshen personal injury lawyers Dupée & Monroe for a free consultation at 845-294-8900.