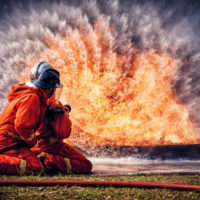 In June 2009, a New York City firefighter injured his ankle in a slip and fall during a training exercise. The firefighter was using an experimental hose which he claimed had too much pressure, and a backup person was not present to provide stability. An additional factor leading to the slip and fall was an accumulation of water on the floor from a prior exercise which was not removed due to improper drainage in the training facility. The firefighter sued the City of New York for common law negligence and for violation of General Municipal Law section 205-a, which imposes liability on a fire department for a firefighter’s personal injury caused by negligence in failing to comply with a law, rule or ordinance.
The City moved for summary judgment to dismiss the complaint, claiming that the common law negligence claim is barred by the Firefighter’s Rule and the 205-a claim fails because of improper statutory predicates. The court ruled for the City on the first issue but against it on the second.

The Firefighter’s Rule states that firefighters are prohibited from recovering damages for injuries caused by negligence occurring in the very situations that create the need for their services. Under the Rule, there can be no recovery for negligence where the firefighter was exposed to a heightened risk of injury while performing a specific firefighting function.
The Supreme Court, New York County, agreed with the City in the case of Rocco v. The City of New York. Even though the accident occurred during a training exercise, the court held that clearly the plaintiff was on duty as a firefighter doing a specific firefighting function at the time. The negligence claim against the City was dismissed.

In order to succeed on a claim brought under section 205-a, the plaintiff must a) identify a statute or ordinance that the defendant failed to comply with; b) describe the manner in which the injury occurred; and c) state facts that show negligence causing the harm, i.e. negligent noncompliance with a legal requirement found in a well-developed body of law that imposes clear duties on the defendant.
In this case, the plaintiff identified New York Administrative Code section 28-301.1, requiring all buildings to be maintained in a safe condition, as well as Labor Law section 27-a, among others. Section 27-a is the Public Employee Safety and Health Act (PESHA), which requires the same or greater protections as the Occupational Safety and Health Act (OSHA), and requires a public employer to furnish a place of employment free from hazards.
The court concluded that the water accumulation and bad drainage could stand as a violation of the laws alleged, and that those laws can be appropriate predicates to a GML 205-a claim. The court refused to dismiss the plaintiff’s 205-a claim on the City’s motion for summary judgment, so the injured firefighter may yet have his day in court.