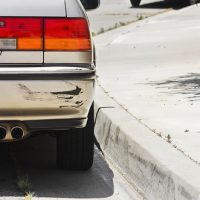 Prior to trial, we moved the court for summary judgment on the issue of liability, asking the judge to rule as a matter of law that the defendant was liable for causing the accident. By showing that the plaintiff was rear-ended while stopped, we established an initial, or prima facie, case of negligence. According to our client, the defendant was on the phone at the time of the accident. The defendant had a different story and argued instead that the plaintiff was in the process of making a right turn but “stopped short,” causing the defendant to hit her.
The court did not buy this argument. Even if the defendant’s story were true, a person turning right at an intersection may have good reason to stop mid-turn, such as to yield to pedestrians in the crosswalk. The driver of a trailing car should be aware of this fact and be prepared to stop.
The defendant in this case could not establish that she was paying attention to the crosswalk or offer any non-negligent reason for why she could not stop in time to avoid a collision. The judge granted our motion holding the defendant liable, limiting the trial to the issue of whether the plaintiff suffered a serious injury and if so, what were the nature and extent of her damages.

The next hearing came four months later on the defendant’s motion for summary judgment. The defendant wanted the judge to dismiss the case because the plaintiff did not sustain a “serious injury” required for a lawsuit under New York Insurance Law section 5102(d). Our client had in fact alleged several different categories of serious injury under the law, including:

The defendant’s job in a summary judgment motion of this type is to submit testimony of medical experts who examined the plaintiff and concluded that no objective medical findings support the plaintiff’s claim. The defendant here relied on reports submitted by two experts: one report did not include any objective medical testing, and the other report contained testing which contradicted the doctor’s own conclusions regarding serious injury! Finally, neither report addressed at all the 90/180 claim for serious injury. Clearly, the defendant failed in her quest to show the plaintiff did not suffer a serious injury as a matter of law, and her motion was denied.