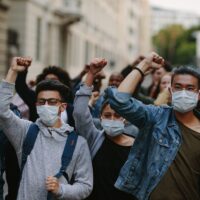 Disorderly conduct is a nebulous crime that criminal justice advocates often claim is abused by overzealous police officers looking to either stop conduct with which they disagree or simply give them an excuse to arrest an agitator. It is commonly used, for example, to arrest college students who “talk back” to a police officer outside of a party or to remove a homeless person from a public space. In this time of civil unrest, protestors voicing their opposition to police brutality and support for other civil rights issues may be concerned that they are vulnerable to charges of disorderly conduct for merely exercising their right to demonstration. This fear is not unwarranted. Read on for a discussion of what may properly give rise to a disorderly conduct charge, and if you or someone you know has been unjustly arrested for protesting or otherwise exercising their rights in the Hudson Valley, call an experienced and passionate New York criminal defense attorney.

Disorderly conduct is a violation, meaning that conviction will not lead to a criminal record, but it is punishable by up to 15 days in jail and a fine. Additionally, it may stay on a defendant’s local records and appear in, for example, a search by prospective employers. More serious types of behavior, including disrupting a funeral or religious service or causing a riot or false alarm, may be punishable as misdemeanors or even felonies, depending on the severity of the conduct.

Disorderly conduct is meant to stop someone who is creating an unreasonable public nuisance for no legitimate purpose. The conduct must take place in public, meaning conduct in your own home should not give rise to disorderly conduct charges unless it is likely to create a public hazard (such as by blaring music late at night).

The disorderly conduct law often conflicts with defendants’ free speech rights. It is written very broadly, giving officers the ability to arrest anyone who is too loud, too obnoxious, or who disobeys a police officer’s order to disperse. Protestors, for example, may be exercising their constitutional rights to protest and refuse to disperse and may find themselves subject to disorderly conduct charges. While such conduct may fall under the technical definition of the crime, charges for such conduct may also be unconstitutional.

Disorderly conduct is often used as a threat and a slap on the wrist by authorities, and a good defense attorney can often get the charges dropped. Dismissal may be available so long as the defendant takes the charges seriously, retains an attorney, and appears in court to contest the charges (or has counsel appear on their behalf, where appropriate). Failing to respond to a summons or desk appearance ticket for disorderly conduct can lead to additional, unnecessary penalties.

If you have been arrested on disorderly conduct charges in Orange County or the Mid-Hudson Valley, contact Dupée & Monroe in Goshen at 845-294-8900 to speak with seasoned New York criminal defense attorneys about the best options in your particular case.