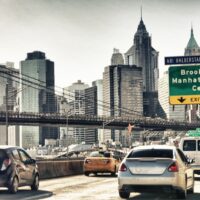 Driving in New York With an Out-Of-State Learner Permit

New York State allows drivers with a learner’s permit from another state to operate a motor vehicle in-state, so long as they meet the following requirements:

Like other states, there are general restrictions in New York that drivers with a learner’s permit must adhere to. Under the graduated driver’s license law, drivers under the age of 18 must also adhere to additional restrictions regardless of whether they have a permit or license from New York or another state.

Out of State Drivers and New York-Issued Tickets

If a driver is convicted of a violation, points will be added to their New York driving record. If that driver accumulates too many points, their license can be suspended or revoked in the same manner that a New York state resident’s license would be.

The New York non-resident driver’s home state may honor the conviction and/or points on a record obtained in New York.

Suspension of Privileges for Non-Resident Drivers

Non-resident drivers in New York can have their privileges to drive in the state suspended or revoked. After the mandated period of suspension or revocation has been satisfied, those privileges can be reinstated.

If a non-resident driver in New York fails to pay a ticket or fine imposed on at least 20 different days, they may be convicted of “failure to pay fines” or “aggravated failure to answer tickets.” This charge is classified as a misdemeanor and comes with a mandatory fine of about $500. There may also be a mandatory surcharge of at least $80 and in some instances jail time of up to 180 days.

If you are a non-resident of New York state who has obtained a ticket, a moving violation, or is battling other issues related to the state’s traffic laws, it’s important to seek professional assistance. Having a legal representative on your side who understands New York traffic law is critical in helping you minimize fines and penalties you may face. At the law office of Dupée & Monroe, our experienced team can help you get the representation you deserve. Call 845-294-8900 to discuss your situation.