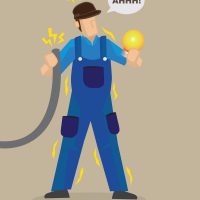 The personal injury attorneys at Dupée & Monroe recently earned a favorable ruling on a case filed on behalf of a local electrical worker. Read on to learn more about the claim, and contact a skilled Orange County construction accident attorney at Dupée & Monroe if you’ve been hurt on the job.

The case, titled Storrs v. Altec Industries, Inc. was based on injuries that a worker suffered due to a defective piece of machinery. Thomas Storrs, the plaintiff, was an electrical lineman working for SPE Utilities, Inc. His company had been hired by Orange & Rockland Utilities to work on an electrical pole in Suffern. He and his coworkers had been provided with a so-called “backyard machine” with an aerial bucket for use in reaching the upper parts of the pole.

On the day of Storrs’ injury, the backyard machine malfunctioned, leaving a worker stranded in the bucket while the machine’s boom was fully extended. Storrs and his coworkers called in a mechanic to lower the boom so that the coworker could get down. The boom was not lowered to ground level, however, and the aerial basket remained attached and about 18 inches off the ground. Storrs and his coworkers moved the machine onto a flatbed trailer and went about trying to remove the basket from the machine. When the workers removed the final pin that held the basket to the boom, the basket (which weighed between 125-150 lbs), fell onto Storrs’ arm and injured him.

With help from the seasoned construction accident attorneys at Dupée & Monroe, Storrs filed a claim against, among others, Orange & Rockland Utilities for money damages under New York Labor Law. Our team of personal injury attorneys recently succeeded on two motions for summary judgment on Storrs’ claims under 240(1) and 241(6), meaning that the judge found Orange & Rockland Utilities liable to Storrs for his injuries even before needing to go to trial on those claims.

Labor Law § 240(1) provides that employers or general contractors will be held absolutely liable for elevation-related injuries that workers suffer on the job. Employers can only avoid liability for these injuries when they can show that the injured worker was the sole cause of their injuries. Here, since the aerial basket was above the ground and injured Storrs when it fell on him, the injury is considered elevation-related. Since Orange & Rockland Utilities was unable to prove that Storrs was the sole cause of his injuries, the court found the company liable under § 240(1).

Labor Law § 241(6) holds employers liable when they fail to provide safety and protection to employees by violating a New York Industrial Code regulation. In Storrs’ case, the utility company was found to have violated a regulation on repairing or replacing defective power-operated equipment. Since the violation of this rule resulted in an injury to Storrs, the court ruled that the company was liable under § 241(6).

If you’ve been injured on the job in Orange County or Dutchess County, contact the seasoned and effective Goshen workplace injury lawyers at Dupée & Monroe for a free consultation at 845-294-8900.