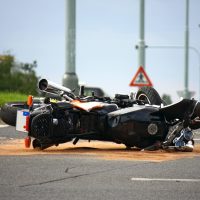 Whether you’re a newly-licensed New York motorcycle rider, or you’ve been riding for years, you need to understand the dangers you face when you’re on the road. Riders who remain vigilant against these threats are much more likely to remain healthy and active motorcycle riders than those who don’t. Keep these important tips in mind the next time you get on your bike, and contact a skilled New York motorcycle accident attorney after a crash.

1. Riders who wear helmets are much more likely to survive an accident.

Motorcycle helmets have been shown to be 37% effective in preventing fatal injuries to riders, and 67% effective in preventing brain injuries to those involved in a crash. Since head injuries are the number one cause of death among motorcyclists, helmet use is an easy way for bikers to prevent fatal injuries. In addition to the life-saving abilities of motorcycle helmets, helmet use is mandatory under the law. Every New York rider must use a helmet which conforms to US Department of Transportation standards.

Motorcycles are far more likely to be involved in a single vehicle crash than are passenger vehicles. Each year, around 41% of all fatal motorcycle accidents are single-vehicle crashes. Even if only one vehicle is involved in a crash, the injured rider may still have a claim for money damages resulting from the crash, including a product liability claim against the bike’s manufacturer, a claim for a defect in the roadway, or when a so-called “phantom driver” caused the accident.

3. New York motorcyclists must use proper equipment when riding.

Due to the different safety concerns which apply, New York state has created certain laws which apply only to riders. For example, motorcycles must use their headlight during the day to increase their visibility. Bikers can’t transport passengers unless their bike has a passenger seat and footrest. If a motorcyclist’s helmet contains speakers, those speakers may use only one earphone. Bikers must also use eye protection while on the road that meets certain minimum requirements.

4. Accident rates are higher for bikers.

While motorcycles make up only about 2% of the vehicles on the road, they make up 9% of all those fatally injured. This disparity is due in part to the inherent vulnerability of driving without the protection of car walls. However, certain bikers are prone to increased risk-taking behavior, such as traveling at higher speeds, failing to use necessary safety equipment, or riding while intoxicated.

5. Other drivers may not always see you, or understand how to safely drive around you.

Some passenger vehicle drivers just don’t know how to drive around motorcycles. These drivers will either fail to inspect their blind spots, underestimate the speed of an oncoming bike, or cut too closely in front of a motorcycle when merging lanes. In order to preserve your own health, maintain a safe speed and enough distance from other vehicles to allow time to avoid a crash.

If you’ve been injured in a motorcycle accident in New York, get help seeking the compensation you’re owed for your medical expenses, time off work, and pain and suffering by contacting the seasoned and dedicated Goshen motorcycle crash attorneys at Dupée & Monroe for a consultation, at 845-294-8900.