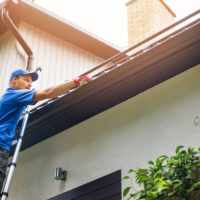 In the case of Florencio Fuentes v. Spectrum, Inc. and Skanska (USA), Inc., in the Supreme Court of New York, New York County, the attorneys at Dupée & Monroe were successful in having the court grant their motion for summary judgment on the issue of liability. This means the defendant is liable for the plaintiff’s injuries as a matter of law, and the only issue to resolve at trial (or settlement) is how much the defendant owes the plaintiff in damages.
Our client, a drywall finisher, was in a home performing warranty repair work when the ladder he was standing on slipped out from under him, causing him injury when he fell on top of the ladder. Our client was hired by Concort Drywall Construction Corp. to perform the work. Concort in turn was a subcontractor for Spectrum and Skanska, who were the general contractors on a development project which included the home in question.
We sued the homeowner, the general contractor and the subcontractor under several legal theories, including Labor Law sections 200, 240(1) and 241(6), and common law negligence. The court granted summary judgment in favor of the homeowners, dismissing them from the complaint, since section 240(1) exempts owners of single-family homes from liability under the law. Meanwhile, Spectrum filed cross-motions for summary judgment to dismiss them from the suit or to be granted indemnification from Concort, and we filed a cross-motion for summary judgment on the issue of liability under 240(1).

Section 240(1) requires contractors and owners to provide protection for workers from gravity-related accidents and injuries, such as falling from heights or being struck by falling objects. Proper protection may include providing scaffolds, ladders, hoists, stays, slings and other devices.
The ultimate responsibility for worksite safety lies with the owner and general contractor, not the worker, and owners and contractors are absolutely liable for a breach of this statutory duty which proximately causes an injury. The worker’s own comparative negligence is not a defense. Unless the plaintiff’s negligence was the sole proximate cause of the injury, the owner/contractor remains liable.
Our client was using an A-frame ladder leaned against the wall in an unopened position that was not secured or anchored or supported by another person. Spectrum argued that the plaintiff misused the ladder and was responsible for the accident, but our client testified that he did not have room to open the ladder in the workspace, and the defendant did not demonstrate that the ladder was misused. Regardless, the defendant breached its duty by not securing or supporting the ladder.
The defendant also argued that the work performed was routine maintenance work, which is not covered by 240(1), but we were able to demonstrate that the work was repair work, which is specifically covered by the law.

Spectrum claimed it was not the general contractor for the work performed and should be excused from liability because it was not negligent and did not control or supervise the work. The court held that Spectrum was most definitely the general contractor and did in fact direct the plaintiff to perform the work. Spectrum may in fact even have supplied the ladder. There was no reason to dismiss these claims against the defendant.

This law creates a duty to provide reasonable and adequate protection and safety, but requires the plaintiff to identify a specific provision of the Industrial Code with concrete safety specifications which were violated. We provided several. The defendant challenged some of them, but did not mention others, so our claims under this section of the law survived a motion to dismiss as well.
In the end, although the homeowners were removed from the suit, our other claims against Spectrum, Skanska and Concort survived to proceed to trial. In addition, with the successful granting of our summary judgment motion on section 240(1) liability, we headed toward trial well on the way to obtaining compensation for our client’s injuries.