Leaving the Scene of an Accident in NY 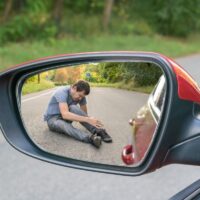 In the State of New York, drivers involved in an accident are typically not permitted to leave the scene without stopping and exchanging relevant information. Drivers may also be required to report the accident to the authorities, depending on the situation. Fleeing the scene of an accident (engaging in a “hit and run”) can carry stiff penalties, depending on the severity of the crash. If you are facing hit and run or other criminal charges in New York, get help from a seasoned New York criminal defense lawyer. Continue reading to learn about New York’s hit and run laws.

Any time there is an accident in New York that involves injury to property, a domestic animal, or to a person, all involved drivers must stop. At a minimum, drivers must stop and show their license (including legal name and current address), registration, and insurance information to the owner of the damaged property, which may be another driver or a property owner. If someone is or may have been injured, drivers are required to report the accident to the police and/or call 911 for emergency assistance.

Penalties for Fleeing the Scene

Leaving the scene of an accident without sharing information with other parties involved or reporting the accident to the authorities is illegal. The penalty for fleeing the scene depends on the nature of the accident.

For accidents involving only property damage, failing to exchange information or report the accident is a traffic violation, rather than a crime. The violation is punishable by up to $250 in fines and 15 days in jail. If the accident caused major damage or the driver was grossly negligent or reckless, they could face more severe penalties.

For accidents involving injury to a domesticated animal, meaning a cat, dog, horse, or “cattle-like” animal, failing to exchange information or report the accident is still a traffic violation. The penalties are the same as for property damage (up to $250 fine and 15 days in jail), while certain acts of intentional animal cruelty or significant monetary damage may increase the potential penalty.

If you had some valid excuse for not stopping at the time, you might have a defense against the serious charges that can be lodged against you. It might be worthwhile to visit with an experienced New York criminal defense attorney and explain your situation.

Dedicated Advice and Representation for Your Hudson Valley Criminal Charges

If you have been arrested or charged with a misdemeanor or felony in New York, call Dupée & Monroe, P.C., to get help from a compassionate criminal defense lawyer. From our offices in Goshen, we represent clients charged with all manner of criminal offenses in Orange County and throughout the Hudson Valley.