Local Man Arrested and Charged with Criminal Possession of a Weapon 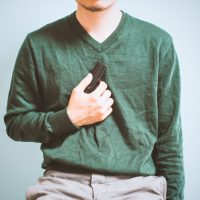 An Ulster County resident was recently arrested and charged with multiple crimes, including criminal possession of a weapon. Learn more about this case and the charges imposed, and contact an Orange County criminal defense attorney if you’re facing weapons charges in the Hudson Valley.

The recent arrest occurred on Tuesday, January 2, 2018. A 20-year-old Kingston resident was the subject of an active warrant issued by Kingston City Court. Members of the Kingston police department’s Special Investigations Unit and the Ulster Regional Gang Enforcement Narcotics Team found the accused on Washington Avenue in Kingston. The man was carrying crack cocaine, marijuana, and a loaded handgun at the time of his arrest. He was charged with multiple felonies, including second- and third-degree criminal possession of a weapon and fifth-degree criminal possession of a controlled substance.

Charges for criminal possession of a weapon

This charge can often be bumped up to a charge of second-degree criminal possession of a weapon. Third-degree charges can become second-degree charges when the weapon being carried is loaded and the individual is outside their home and does not possess a New York State permit for the weapon, or where law enforcement determines that the suspect had intent to use the firearm unlawfully against another person. Additionally, a firearm can be considered “loaded” under New York law even when there are no bullets in the gun. If the person with a gun has quick and easy access to nearby ammunition, then the weapon can be considered “loaded.” Second-degree criminal possession of a weapon carries very stiff penalties—a mandatory minimum sentence of 3 ½ years in prison, even for someone without a prior criminal history. The charge carries a maximum sentence of 15 years in prison. Those charged with criminal possession of a weapon are strongly advised to seek an experienced criminal defense attorney to represent them against these charges.

If you’re facing New York weapons or drug charges in the Hudson Valley, get help from aggressive and dedicated criminal defense attorneys and contact the Goshen offices of Dupée & Monroe for a consultation, at 845-294-8900.