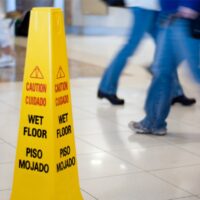 Car crashes are the most common reasons for personal injury cases across the country. Traffic accidents–whether they involve passenger cars, large trucks, pedestrians, motorcycles, bicycles, or other vehicles–almost always result from some form of human error. Someone failed to follow the rules of the road, or they failed to act appropriately when confronted with a hazard, and someone else was injured as a result.

In New York, car accident victims must rely on their no-fault insurance coverage unless they suffered “serious injury” as a result of the crash. If they suffered a serious injury, then they can file a claim against the at-fault driver.

Slip and fall claims are also extremely common in New York and nationwide. A slip and fall accident occurs when a visitor slips, trips, or falls due to a hazard on the property. The visitor may be a customer at a grocery store or a guest in someone else’s home. The hazard may have been caused by the premises owner or operator–such as an unmarked wet floor left after an area was mopped–or may have been caused by other parties but left unremedied by the premises owner–such as when a customer spills a liquid in a grocery store and the employees fail to clean it up in a timely fashion.

Product liability arises when a person is injured due to a defective product. Defective products may include automobiles, home appliances, children’s toys, pharmaceutical drugs, or any other good that was placed into the market. Products may be defective as originally designed or they may become defective due to some error in the manufacturing process.

If You’ve Been Hurt, Dupée & Monroe Can Help

If you need help getting the money you’re owed after a negligence-based accident in New York, contact the passionate and trial-ready Goshen personal injury lawyers Dupée & Monroe for a free consultation at 845-294-8900.