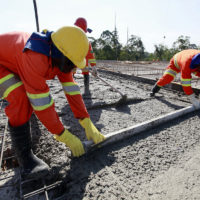 In the case of Rosenthal v. Structure Tone, we were able to fend off the defendants’ motion to dismiss and keep our client’s case alive for trial. Our client was an electrician working on a construction project at One New York Plaza who was injured when he stepped into an opening in a computer floor and fell. The opening had been obscured by a carpet remnant left by another contractor who was installing carpet in the area. We sued the general contractor and the building owners, and those defendants in turned sued our client’s employer, the electrical subcontractor on the project. The general and the property owner then made a motion for summary judgment to dismiss the claims against them, which were partly granted and partly denied.
Our claim for liability fell under New York Labor Law section 241(6), which states:
“All areas in which construction…work is being performed shall be so constructed, shored, equipped, guarded, arranged, operated and conducted as to provide reasonable and adequate protection and safety to persons employed therein or lawfully frequenting such places.”
In a 241(6) claim, it is necessary to show that the plaintiff’s injuries were caused by a violation of an applicable Industrial Code provision that sets forth a concrete standard of conduct. We pointed to two:

In deciding the motion, the court cited a previous case which had determined that a hole in a computer floor and similar size holes did not count as a “hazardous opening” for the purpose of the first rule. This left questions about whether the carpet remnant was a “tripping or other hazard” under the second rule. Specifically, was the carpet remnant “debris?” Was it “integral to the work being performed?” The court felt that these were questions of fact for the jury to decide. The court granted the defendants’ motion regarding the first rule but denied it as to the second. The upshot of the ruling was to more narrowly focus the issue at hand and keep the case alive for trial or a favorable settlement.