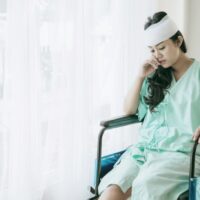 We’ve previously discussed several of the categories of injury that qualify as a “serious injury” under New York’s auto accident insurance laws. An injury must be serious in order for an accident victim to file a claim directly against the at-fault driver; otherwise, the accident victim is limited to coverage under their no-fault insurance policy. In New York, “significant disfigurement” qualifies as a serious injury sufficient to move an accident victim outside of the no-fault insurance scheme. For a discussion of disfigurement under New York personal injury law, read on. If you’ve suffered a serious injury resulting from a car accident in Goshen, the Hudson Valley, or New York City, reach out to a seasoned New York car crash lawyer for help.

When asking whether an injury is so serious as to warrant direct liability, New York law acknowledges that not all harm is medical in nature; having a serious scar marring a person’s face can do just as much damage to their mental state and well-being as would losing an internal organ. Disfigurement might take the form of scars or burns, it might be the loss of a limb, ear, or eye, or anything else which significantly alters a person’s appearance, even if there is no accompanying functional limitation.

Significant Disfigurement is Not a Medical Diagnosis

New York courts have developed a body of law addressing what constitutes a significant disfigurement. Unlike determinations concerning disability or other legal matters, when it comes to disfigurement for the purposes of the insurance law, the courts have generally taken a layman’s approach. Rather than requiring testimony from a doctor or other medical expert to “diagnose” a person with severe disfigurement, the courts instead look to how a “reasonable person” would view an injury. The courts ask how a reasonable person might react when seeing a scar or other visible injury.

An injury is considered disfiguring if it alters a person’s natural appearance for the worse. A disfigurement is significant under New York law if a reasonable person would view the alteration in appearance “as unattractive, objectionable, or as the subject of pity or scorn.” Rather than determined as a matter of medical diagnosis, “the question of whether a plaintiff has suffered a serious injury is usually for the jury.”

A court may find that an injury is so obviously disfiguring, or so obviously minor and non-disfiguring, as to resolve the matter on its own as a matter of law. If the injury could go either way, however, then the jury must decide. The jury will consider a variety of factors including the location of the scar or other mark, the size of the mark, and its visibility. A large scar to the face is much more likely to be considered a significant disfigurement than would be a small scar on a person’s ankle. The jury is also likely to consider the nature of the victim–juries might consider a scar on a man’s torso to be less disfiguring than a similar scar on a woman’s torso.

If You’ve Suffered Significant Disfigurement After a Car Accident, Dupée & Monroe is Here to Help

If you need help getting medical treatment and compensation for the harm you have suffered after a serious crash, or if you are pursuing another negligence-based claim in New York, contact the experienced and zealous Goshen personal injury lawyers Dupée & Monroe for a free consultation at 845-294-8900.