NY Appeals Court Allows Claim of Negligence Over Cow in Road Could Dog Bites Be Next? 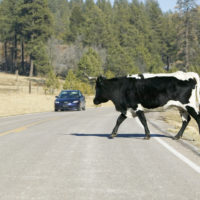 The course of New York law regarding personal injury caused by domestic animals has finally taken a turn from the absurd to the sane, blowing a welcome breath of common sense into what had become a rigid and arguably ridiculous approach to the question of liability when people are injured by animals due to the owner’s negligence.
When a person is injured by a dog bite or any other animal attack, the owner is strictly liable for medical costs under section 123(10) of the New York Agriculture and Markets Law. But to get damages beyond medical expenses, such as for pain and suffering or disfigurement, it is necessary to show that the owner knew or should have known that the animal was dangerous or had a propensity for violence.
This “vicious propensity” rule has been more and more rigidly applied in recent years, with more and more absurd results. Last year in Hastings v. Sauve, the Appellate Division of the Supreme Court of New York dismissed a case where a motorist collided with a cow which had wandered onto the road. Despite evidence that the property owner was negligent in failing to maintain the fence, the court dismissed the case because the owner did not know the cow had a propensity to wander into the road (what cow doesn’t?). Only a few months later, the Appellate Division held a case should have been dismissed when a dog raced across the road in response to being called by its owner and collided with a biker in Central Park. The court held the owner had no knowledge that the dog had “a propensity to interfere with traffic,” so there should be no liability (how about a dog’s propensity to come when called?).
In an unexpected yet welcome reversal, the Appellate Division in May reversed the previous decision in Hastings v. Sauve, holding that the law in fact does not prohibit a suit for negligence when a farm animal is allowed to stray from the property. “Vicious propensity” is no longer the only rule for liability when harm is caused by a domestic animal; there may be times when a lawsuit based on negligence is appropriate.
The Hastings decision does not extend to all animals. Owners of large animals have a different responsibility than owners of household pets, because a large animal roaming free can be dangerous regardless of whether it attacks a person, as the Hastings case shows. It remains to be seen how this court will next address an issue with a small animal, such as the dog in the road scenario described above. It seems likely, however, that in some instances injured plaintiffs will be able to hold pet owners liable when their negligence results in personal injury.