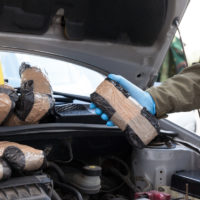 A recent traffic stop in the Orange County town of Newburgh has resulted in an arrest—not of the car’s driver, but of its passenger. This incident is an example of the sort of searches and seizures of individual vehicles that are regularly carried out by New York police during traffic stops.

The local arrest occurred at approximately 1:40 am when Newburgh police pulled the car over for a traffic violation. News reports describe that police found the passenger to be in possession of cocaine, heroin, and drug paraphernalia, but do not describe how this fact was discovered. The passenger, a resident of Vermont, was arrested and charged with possession of a controlled substance with intent to sell, possession of a controlled substance, and criminally using drug paraphernalia.

The rules governing vehicle searches in New York leave police a great deal of latitude in judging whether or not a search is warranted. Under the Fourth Amendment of the U.S. Constitution, people have a right to be free from “unreasonable searches and seizures.” Searches of “persons, houses, papers, and effects” should be conducted only upon grant of a warrant, which requires “probable cause . . . particularly describing the place to be searched, and the persons or things to be seized.”

Over time, the U.S. Supreme Court has developed many exceptions to the requirement that police must have a warrant to conduct a search, as has the New York Court of Appeals. One of the biggest exceptions to this rule is regarding vehicle searches. Under the “automobile exception,” police don’t need a warrant to search a car under the U.S. or New York Constitution without your consent. If the police officer pulls you over for a traffic infraction and develops a reasonable suspicion that you’ve committed a crime when he or she approaches the vehicle, then that officer can conduct a search of the areas that the car’s occupants can reach. This is based on the premise that the vehicle’s occupants could reach for a weapon or could destroy evidence of the criminal behavior in question. “Reasonable suspicion” requires fewer facts to support the belief that criminal activity has occurred than “probable cause,” but a police officer must offer some basis for their suspicion if the legality of the search is questioned. An officer can also conduct a search if there is a contraband item within the officer’s plain view; for example, if drug paraphernalia is visible, the officer would then have cause to search the vehicle.

Despite the fact that police have broad discretion in deciding when they can stop and search an individual, there are still limits to their authority. For instance, if police stop an individual based on an unreasonably mistaken understanding of the law, any results of that stop and search are not admissible in court. Additionally, if an officer’s basis for holding a reasonable suspicion of criminal activity is completely unfounded, this would also result in the court finding the search unreasonable. The fact that these standards are not precise and are constantly changing based on current law makes it critical that you find a New York criminal defense attorney who can advocate aggressively and intelligently on your behalf before the court.

If you are facing criminal charges and need help defending your freedom before the court, contact the experienced and knowledgeable Goshen criminal defense lawyers at Dupée & Monroe for a consultation on your claims, at 845-294-8900.