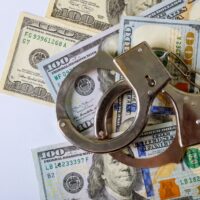 Counterfeiting Money: Criminal Possession of a Forged Instrument in the First Degree

With regard to criminal possession of counterfeit money, there are three key elements to the crime: (1) the defendant was aware that the money is counterfeit; (2) the defendant possessed the intent to defraud, deceive, or injure someone; and (3) the forged/counterfeit instrument is money (and is actually forged/counterfeit). Forgery can take the form of falsely creating, changing, or altering part of an issue of money, stamps, securities or other valuable instruments issued by a government or governmental instrumentality.

Criminal possession of a forged instrument in the first degree is punishable as a class C non-violent felony. A defendant convicted of possessing counterfeit money can face a sentence of between 1-3 years or as high as 5-15 years in prison. If a prison sentence is called for, the sentence will be at least one year in prison. However, for a first offense, a court can determine that prison is not necessary and may instead order probation, community service, fines, or other conditional discharge.

Defending against charges of criminal possession of a forged instrument in the first degree involves undermining the prosecution’s proof regarding one of the required elements of the crime. Knowledge and intent to defraud can be particularly difficult to prove–if you did not know the money was counterfeit, or you merely possessed the fake money but had no intention to use the money to acquire goods or services, then you are not guilty of the crime. If the fake money looks extremely real, for example, it was stacked with other real bills, and you had no part in the creation of the forgery, then you may have reasonably believed the money was, in fact, real. Key to such a defense is that the defendant has not made an admission stating that they were aware the money was counterfeit.

Depending upon the circumstances of your case, there may be other strategies for defending against counterfeit money charges. The police may have committed some error in procedure, in collecting or storing evidence. If there’s an improper chain of custody on key evidence, such as the counterfeit cash itself, then the evidence may not be admissible against you. If the government seized the evidence unlawfully or otherwise violated your constitutional rights, you may have grounds to get the charges dropped. Talk to your defense lawyer about your case and the circumstances of your arrest to determine the best strategy for building your defense.

If you have been arrested for a forgery offense or charged with another crime in New York, call Dupée & Monroe, P.C., to get help from a seasoned white-collar criminal defense lawyer. From our offices in Goshen, we represent clients charged with all manner of criminal offenses in Orange County and throughout the Hudson Valley.