Sharing the Road With Bicyclists 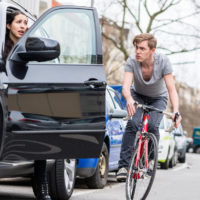 Pedestrians and bicyclists are at high risk in traffic, and the law requires motorists to take extra care in avoiding any collision with them. There are certain safety precautions drivers should take to minimize the risk of injuring cyclists. Likewise, cyclists must not act recklessly when on public roadways and can be held equally liable if their behavior leads to an accident. Below find a list of some of the dos and don’ts for motorists and cyclists in order to best share the road, and if you have been injured in a bicycle accident in the Hudson Valley or New York City, contact our dedicated personal injury lawyers.

In order to avoid collisions with bicyclists, it is important to pay special attention to curbs and the sides of roadways. Check your blind spots before you make a turn, parallel park, open a door or leave a curb. The New York DMV advises that you actually turn your head rather than relying only on rearview mirrors.

While driving, give cyclists space, and reduce your speed as you pass them (always on the left). Air pressure from your car can cause them to lose stability if you are going too fast. Additionally, the same rules of the road and right-of-way apply to bicyclists: You must yield the right-of-way where appropriate just as if they were driving a car. Be wary that they may react unexpectedly to road hazards, just as any driver would, with a sudden change in speed or a swerve. Pay close attention to bikers on the roadway in case they signal for stops or turns. Be careful at crosswalks and at intersections, and be on the lookout for any cyclists who might cross the street or turn from the left turn lane.

Responsibilities of Bicyclists in New York to Prevent a Crash

Bicycle riders, too, have certain responsibilities to limit the risk of accidents on the roads. Bicycle riders are encouraged to minimize the space they take up on roadways in order to avoid traffic hazards. Bicyclists must ride in a bicycle lane where available, and where there is none, hug the right curb, shoulder, or other edge of the road in order to avoid disrupting other traffic. Cyclists can move left to avoid hazards or make a left turn.

Cyclists must come to a full stop at signs, lights, and before entering a roadway from a driveway, an alley, or a curb. Cyclists should never travel with more than two riders side-by-side in a single lane. Cyclists should also be wary of local laws that prevent riding on sidewalks. Cyclists must also signal turns, lane changes and stops using the appropriate hand signals. While driving at night, cyclists must have a headlight and a red tail light.

Cyclists should also avoid dangerous behavior such as riding while carrying something that impairs their vision or prevents them from having at least one hand on their handlebars; biking while intoxicated; speeding; and using their phone while biking, among other things.

Get Legal Representation after a Bicycle Accident

If you or someone you love has been injured in a bicycle accident in New York, find out whether you’re owed money for your accident-related costs by contacting the passionate, seasoned, and dedicated Goshen and Manhattan personal injury lawyers Dupée & Monroe for a free consultation at 845-294-8900.