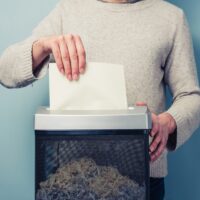 We’ve seen it happen on TV countless times: The police kick down the door to a drug-dealing operation and the culprits immediately start flushing the drugs down the toilet. Or the perpetrators of a white-collar crime desperately shred documents before the FBI shows up. Destroying evidence that may be used to incriminate you might seem like your best option at the moment, but the act of destruction itself could be used against you. In fact, destroying the evidence may itself be a more serious crime than whatever the evidence might have shown. Read on to learn about New York’s law against evidence tampering, and call a New York criminal defense lawyer after an arrest in the Hudson Valley.

The Elements of Penal Code 215.40: Tampering With Physical Evidence

New York Penal Code § 215.40 criminalizes tampering with physical evidence. Pursuant to the law, a defendant can be convicted for evidence tampering in either of the following circumstances:

Penalties for Tampering With Physical Evidence

Tampering with physical evidence is a Class E felony, punishable by one and a half to four years in prison. That means that a defendant who might have been arrested for possession of a small quantity of narcotics, an infraction or misdemeanor, might find themselves instead charged with a felony should they attempt to destroy those drugs or other evidence.

Breaking Down the Elements of Evidence Tampering

Any other error by the police or weakness in the prosecution’s case may be used to defend against evidence tampering charges. Talk to an experienced criminal defense lawyer about your case if you have been charged with tampering with physical evidence.

If you have been arrested for tampering with evidence or other criminal offenses in New York, call Dupée & Monroe, P.C., to get help from an accomplished criminal defense lawyer. From our offices in Goshen, we represent clients charged with all manner of criminal offenses in Orange County and throughout the Hudson Valley.