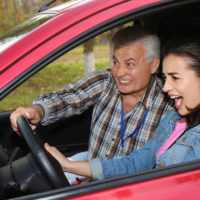 A tragic accident has taken the lives of three local Orange County teenagers. The Goshen High School students were in a 2007 Chevrolet Malibu, taking a driver’s education course with the Middletown-based Decat Driving School. There were four students and one instructor in the car, with one of the teen students driving the car at the time of the crash. The accident occurred at the intersection of County Road 1 and Blooms Corner Road in Warwick. The Malibu had a stop sign and flashing red light, while a Freightliner tractor-trailer truck had a flashing yellow light. The Malibu drove through the intersection suddenly, and, unable to stop in time, the Freightliner hit the Malibu in the rear half of the car. Two of the three students in the back seat of the car died at the scene of the accident. The third student was taken to Westchester Medical Center after being critically injured in the crash, but succumbed to his injuries several days later. The driver of the Malibu was treated at Westchester Medical Center, and later released. The 60-year-old driving instructor was treated at Orange Regional Medical Center and released, and the tractor-trailer driver was treated at a hospital in Warwick.
The intersection in question has been a source of controversy for some time. For at least eight years, Warwick town officials have been calling for a full traffic signal to replace the flashing lights that currently control traffic. The intersection was witness to 13 accidents between January 2011 and July 2012, though none were fatal. Orange County conducted a study of the intersection in 2012, and concluded that the intersection didn’t meet federal standards for a full traffic signal. After the death of the three teens, the county now intends to take another look at data and conclusions from the study.
If you’ve lost a loved one in a car or truck accident, finding skilled legal representation immediately after the crash can make all the difference in ensuring you’re compensated for your loss. A seasoned personal injury attorney will know to investigate whether or not the municipality may be responsible for not ensuring that the roadways and intersections were as safe as possible. Contact the experienced Goshen personal injury attorneys at Dupée & Monroe for a free consultation on your possible car accident lawsuit, at 845-294-8900.