What Is Lane Splitting? 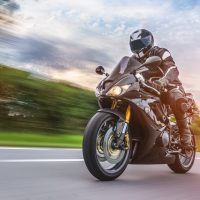 Lane splitting is the practice of motorcycles riding between rows of stopped or slowly moving vehicles in the same lane or between lanes. You’ve probably seen this occur as you’ve sat in stop-and-go traffic on the road or highway. Was your reaction one of fear for the safety of the motorcyclist and others? Or was it envy that a person on a more maneuverable vehicle didn’t have to put up with the traffic you were stuck in? In this blog post we discuss the ins and outs of lane splitting in New York, including whether it’s safe and whether it’s even legal. If you’ve been seriously injured in a traffic accident in New York or the Hudson Valley caused by the negligence of another driver, whether as a motorcyclist or other motorist, call an experienced Goshen personal injury lawyer to help you get the care and compensation you need and deserve.

Lane splitting goes by various names to describe the various ways motorcycles take the road in ways that cars can’t. “Lane splitting” refers to riding in the same lane already occupied by a car, usually to pass the car while it is stopped in traffic. “White lining” describes when a motorcycle rides between lanes of traffic on the broken white line separating lanes, either while traffic is stopped or moving slowly. “Filtering” usually occurs when cars are stopped at intersections; it involves the motorcyclist weaving in and out of the lane to get around stopped cars and improve the rider’s position closer to the intersection. Finally, “lane sharing” is when two or more motorcycles occupy the same lane, either riding abreast or in a staggered formation.

Currently, lane splitting is only legal in California. The legality of lane splitting had been a gray area in the Golden State for years, but when the controversial practice came to the fore a few years back, legislation was passed to expressly allow it so long as it is done safely. Utah and Arizona both allow filtering under certain prescribed conditions, and Montana allows a limited version of lane splitting.

What about everywhere else? About a dozen states, including New Jersey, don’t mention the practice one way or another, so the conventional wisdom there is that it is up to the Highway Patrol to decide whether a motorcyclist is riding safely or whether a ticket is in order.

In the majority of states, however, lane splitting is expressly prohibited. This includes New York. Section 1252 of the Vehicle and Traffic Law has the following to say about operating motorcycles on roadways laned for traffic:

(b) The operator of a motorcycle shall not overtake and pass in the same lane occupied by the vehicle being overtaken.

(c) No person shall operate a motorcycle between lanes of traffic or between adjacent lines or rows of vehicles.

(d) Motorcycles shall not be operated more than two abreast in a single lane.

(e) Subsections (b) and (c) shall not apply to police officers in the performance of their official duties.

Subsections (b) and (c) clearly outlaw both lane splitting and white lining as well as filtering, and subsection (d) seems to prohibit lane sharing as well, except for when two motorcycles are riding abreast. So there you have it. Practically no form of lane splitting is allowed in New York state.

But Is It Safe?

In any given year, several state legislatures, such as in Connecticut recently, introduce legislation to legalize some form of lane splitting or filtering. Arguments in favor of allowing the practice include that it eases traffic congestion overall for everyone on the road, a lofty goal in crowded cities like New York. Allowing lane-splitting or white lining could also help keep a biker safe from being rear-ended in stop-and-go traffic. Low-speed rear-end collisions can be painful and debilitating for any crash victim, but they can be especially dangerous to a vulnerable road user on a bike.

The argument against lane splitting is simply that it is too dangerous. By moving faster than surrounding traffic, motorcyclists have less time to react to a motorist’s sudden lane change. A less experienced rider might also not split lanes safely or successfully, causing property damage at a minimum and personal injury in the worst case. Even where lane splitting is legal, it must be done safely. California recommends that motorcyclists not split lanes at speeds 10 miles per hour faster than surrounding traffic and not to do it all if traffic is moving at 30 mph or more. Riders there could still be cited for performing the maneuver recklessly in the eyes of the highway patrol.

Motorcycle accidents are most often the fault of negligent, aggressive or reckless automobile drivers who execute left turns into the path of an oncoming bike, squeeze or crowd a motorcyclist out of their rightful lane, fail to signal turns and lane changes, follow too closely, or fail to look out for motorcycles and check their blind spots before turning or changing lanes. However, motorcycle riders can also be negligent, aggressive or reckless and cause accidents by their driving mistakes or wrongful behavior. Lane splitting is one example of riding behavior that could be considered negligent per se in New York by virtue of being unlawful and a danger to motorists.

The motorcycle accident attorneys at Dupée & Monroe help injured motorists of all kinds, as well as bicyclists and pedestrians, when they have been hurt because of another’s negligence on the road. For help after a motorcycle crash or other motor vehicle collision in New York’s Hudson Valley, contact the dedicated and trial-ready Goshen personal injury lawyers Dupée & Monroe for a free consultation at 845-294-8900.