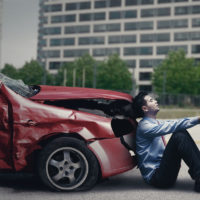 An accident resulting from a driver traveling at an excessive rate of speed occurred recently in the City of Beacon in Dutchess County. On Friday, September 18, at around 6:00 in the morning, 64-year-old Peter Mosen of the Orange County Village of Walden was heading westbound on Interstate 84. Jason Vargas, a 28-year-old Massachusetts resident, was also traveling westbound on I-84. Vargas came from behind Mosen, traveling at what police believe was a high rate of speed. Vargas, traveling with a nine-year-old passenger, lost control of his vehicle. The vehicle struck the earth embankment in the highway’s median and then, likely due to the high speed at which the car was traveling, bounced back into the lanes of traffic and collided with Mosen’s Chevrolet Impala. Mosen received severe leg injuries in the accident and required airlift transport to Westchester Medical Center with non-life-threatening injuries. Vargas and his passenger were taken to Mid-Hudson Regional Hospital for treatment of minor injuries. The accident resulted in the temporary closure of I-84.
Speeding may seem like a necessary risk when you’re in a hurry, but it can have life-altering consequences. According to the National Highway Transportation Safety Administration, speeding is the leading cause in between 11,000 and 13,000 motor vehicle fatalities each year. Speeding is the third most common contributing factor in car crashes, behind distracted driving and impaired driving, and is a contributor in approximately 1/3 of all fatal car and truck accidents each year. When road conditions are worse during the winter, speeding becomes an even more lethal behavior, accounting for up to 60% of fatal crashes on icy roads. Additionally, speeding costs society $40 billion in related costs every year.
Not only is speeding highly dangerous to the speeder and others, excessive speed can result in the imposition of criminal charges and suspension of the driver’s license. If the negligent driver who caused a car accident was traveling at an extremely high rate of speed when the crash occurred, the court will take this fact into account when determining responsibility for the crash.
If you’ve been hurt in a car crash in Orange County or the Hudson Valley, contact the experienced and knowledgeable personal injury and car accident attorneys at Dupée & Monroe, P.C. in Goshen for a consultation on your claims, at 845-294-8900.