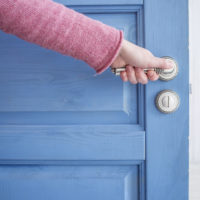 The attorneys at Dupée & Monroe are presently representing a little girl, through her mother, for personal injuries she sustained when she was hit in the face by a door at school. Back in July, the teacher and school district who were being sued filed a motion for summary judgment with the court. If they were successful on their motion, the judge would have dismissed the case. Fortunately, we argued successfully against the motion, and it was denied by the court on October 30.
The case is St. Eloi v. Gunsch and Newburgh Enlarged City School District, being heard in the Supreme Court of New York, Orange County. The accident occurred on January 12, 2012 at Meadow Hill Elementary School. Our client Mariala, a six year old kindergartner, was being escorted down the hallway by her teacher to catch up with her class, who were being taken to the music room by the teaching assistant (Mariala had stayed behind to use the restroom). When Mariala and the teacher were in sight of the group but before Mariala had caught up with them, the teacher left Mariala to catch up with the group by herself and turned away to go to a meeting. Mariala was running to catch up with the class when the gym teacher opened the gymnasium door into the hallway, striking Mariala in the face. Mariala suffered injuries to her upper lip, head and leg.

We sued the school district for negligent supervision and also sued the gym teacher for negligence in opening the door into the hallway in an aggressive and careless manner. In July, the defendants moved the court for summary judgment in their favor. Summary judgment is appropriate when there are no material facts in dispute and one party is entitled to judgment as a matter of law. Summary judgment is a pre-trial motion, and if granted, the matter is disposed of without a trial. If the defendants’ motion were to be granted, the judge would dismiss the case against them.
In support of their motion, the school district argued that the law requires reasonable supervision of students, but not constant watch, and that this accident would have happened even if the school had been providing constant supervision. Also, the school alleged that the accident happened because Mariala was running and not wearing her glasses, not because of inadequate supervision. For her part, the gym teacher testified that she opened the door slowly and carefully after first looking to see if anyone was coming.
Our arguments in opposition of the motion stressed the point that material issues of fact did exist about how the door was opened and whether the accident would have happened had the teacher done more to supervise the student, such as escorting her all the way until she was with the class rather than abandoning the kindergartner to negotiate the hallway on her own. In opposition to the gym teacher’s testimony, we had the testimony of the school nurse that the door was opened “suddenly” as well as Mariala’s own testimony that the door opened “fast.”
The court agreed with us that questions of fact did indeed exist that should be decided by a jury. The conflicting testimony between the gym teacher on the one hand and the student and nurse on the other was enough to send that part of the case to trial. As for the issue of school supervision, this is almost always a question of fact for the jury, unless the accident happened so quickly that no amount of supervision could have prevented it. The court held that the defendant did not establish that fact in this situation and denied the school district’s motion as well.
We will continue in our effort to achieve justice for Mariala and make sure she is compensated for her injuries, while helping to ensure that school districts apply appropriate supervision to prevent accidents like this in the future.