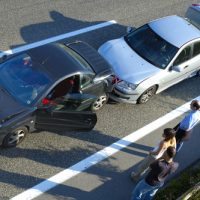 In the case of Garry and Diane Fowler v. Batiste Tucker and Omar and Mary Stringfield, we represented the Fowlers, who were injured in a three-car collision on Route 17K in the Town of Newburgh. Our clients were heading west on Route 17K, and the defendants were heading east. The Stringfields had stopped on the road and were waiting for traffic to clear so they could make a left turn into a gas station. They were rear-ended by Tucker, and the force of the impact propelled their vehicle into the westbound lane, where it collided with our clients’ vehicle.
Before trial, we filed a motion for summary judgment on the issue of liability, asking the judge to rule as a matter of law that the defendants were negligent and liable for the injuries they caused. At the same time, the Stringfields filed a cross-motion for summary judgment to dismiss them from the complaint, which would leave Batiste Tucker as the sole remaining defendant.
Judge Ritter of the New York Supreme Court, Orange County, granted both motions. On the issue of liability, it is well-settled that when one car rear-ends a stopped vehicle, the driver who rear-ended the other car is presumed to be negligent, unless the driver can show some non-negligent reason for the crash.
In this case, the reason Tucker offered was that he was blinded by extreme sun glare and never saw the Stringfields’ vehicle. However, he also testified that prior to the accident he had been following another vehicle at 40 miles per hour and a distance of one car length, which the court clearly found to be an unsafe following distance. Also, the Stringfields testified that at least one other car passed them while they were stopped, so presumably Tucker should have been able to do the same thing as well. For these reasons, the judge held that Tucker was liable to our clients as a matter of law.
We had also sued the Stringfields for negligence, since our clients testified that the Stringfields’ vehicle was stopped with its tires on the double yellow line with the wheels turned to the left, and this position helped propel the vehicle across the double yellow and into oncoming traffic when it was hit. The court did not agree that this was necessarily negligent, and regardless felt that Tucker’s own negligence “superseded” any possible negligence on the Stringfields’ part.
The judge therefore dismissed the Stringfields from the lawsuit. With a judgment of liability against Tucker as a matter of law, all that was left was to determine the amount of money damages this defendant owed to our clients.