What Are NY’s Seatbelt Laws For Buses? 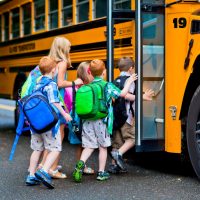 Traffic safety advocates from the federal level all the way down to the town traffic cops talk about the importance of seatbelts. “Seatbelts save lives,” they say; and they do. Why is it, then, that when you get onto a city bus, there’s not a seatbelt to be found? Shouldn’t a vehicle with 50 people crammed inside have greater safety measures than a vehicle that seats four or five? Continue reading to learn about New York’s seatbelt laws for buses and the justification for those rules. If you’ve been injured in a bus accident or other traffic accident in Goshen, the Hudson Valley, or New York City, reach out to a seasoned New York bus crash lawyer for help.

New York State law does, in fact, require seat belts to be installed on school buses. Any large school bus manufactured after July 1, 1987, must be equipped with seat belts, and those belts must be accessible to passengers. School bus drivers are required to wear seat belts. Children under the age of four must ride in a federally approved, properly-installed child safety seat.

Passengers in buses other than school buses are not required to wear seat belts.

There are reasons why seat belts are not required in buses, even school buses. Safety experts have long debated the utility of seat belts in buses. In fact, school buses are considered one of the safest means of travel, even without seat belts–school buses are 40 times safer than riding in a car. Only a few deaths occur on buses every year, in contrast to the many thousands of deaths suffered by occupants of other vehicles.

School buses are extra safe for a number of reasons. Students are packed in with cushioned seats very close on all sides, acting as a sort of all-around airbag. People are seated high off the ground on buses, so the impact location with an automobile, for example, would be well beneath the seats. Buses are much heavier than other vehicles, meaning they are likely to withstand a traffic collision with minimal effect on the passengers. It would add considerable expense to add seat belts to every bus and to enforce their use, which municipalities would prefer to avoid.

Some safety advocates, including pediatric medical associations, still vie for the use of seat belts in buses (especially school buses). In serious collisions, such as rollover accidents, seat belts would provide an additional measure of protection for bus occupants.

Regardless of seat belts, people still suffer serious injuries on buses when they are out of their seats, including falls while the bus is in motion and getting on or off the bus. These accidents are often attributable to the driver’s negligence.

If you need help getting medical treatment and compensation for the harm you suffered after a serious crash, or if you are pursuing another negligence-based claim in New York, contact the compassionate and dedicated Goshen traffic accident lawyers Dupée & Monroe for a free consultation at 845-294-8900.