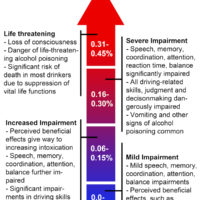 According to the New York Governor’s Traffic Safety Committee, the number of alcohol-related crashes has remained steady over the past several years. There were 5,609 alcohol-related traffic injuries in 2016, roughly equal to the 5,672 in 2015 and the 5,618 injuries in 2016. Likewise, the number of impaired driving arrests has hovered around the same number: from 44,501 in 2015 up to 45,176 in 2016 and back down to 44,026 in 2017, although well below the 50,805 arrests in 2013. New York officials likely view the numbers as a partial success; given that there are more cars on the road every year, a stable number means a drop in the rate of accidents, perhaps as a result of statewide drunk driving crackdowns.

A bill currently before the New York State Assembly would take New York’s anti-drunk-driving efforts to the next level by reducing the legal blood alcohol content level for drivers from the percentage that New York and every other state have maintained for many years. Read on for details about the potential new law, and contact our Goshen DWI defense lawyers if you have been arrested for DWI or DWAI in Orange County or the Hudson Valley.

Assembly bill A03208, currently under consideration in the Senate Transportation Committee, would lower the legal blood alcohol content (BAC) for driving across the state of New York from 0.08% to 0.05%. The bill would also lower the limit for aggravated driving while intoxicated (DWI) from 0.18 to 0.12%. We previously discussed the more serious penalties posed by aggravated DWI.

The bill is sponsored by Democratic New York Assemblyman Felix Ortiz, following a recommendation from the National Academies of Sciences, Engineering and Medicine. The collective science academy called for a reduced BAC limit across all states in a report released this January, which found that driving is impaired at a BAC limit below the standard 0.08%. The study cited examples from other countries such as Japan, Austria, and Denmark, which saw positive results after lowering the BAC limit to 0.05%. The report also recommends increasing alcohol taxes, raising the number of sobriety checkpoints, and reducing the availability of alcohol.

The American Beverage Institute opposes the new law, arguing that it targets social drinkers rather than the heavy drinkers who are more likely to cause fatal accidents. Data from the National Highway Traffic Safety Administration shows that, in New York, around 70% of alcohol-impaired traffic deaths involve a driver with a BAC of 0.15 or higher.

New York would not be the first to lower the limit below the traditional 0.08%:  In December 2018, Utah dropped the legal driving limit to 0.05% BAC.

If you’re facing DWI charges in New York, find a skilled attorney to fight for you by contacting the dedicated and effective Goshen DWI defense lawyers Dupée & Monroe at 845-294-8900.