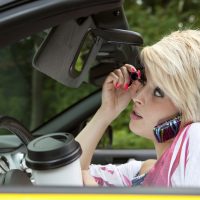 Each year, the AAA Foundation on Traffic Safety looks at trends among drivers’ perceptions and opinions of unsafe driving habits, and studies how those opinions compare to the drivers’ actual habits when behind the wheel. This year’s study shows the disconnect between drivers’ espoused views and their habits, especially when it comes to distracted driving. The study also found that one generation has more favorable opinions toward unsafe driving behaviors than any other.

Survey looked at habits of drivers of all ages

The AAA Foundation study included survey responses from over 2,000 licensed drivers aged 16 and up who had been behind the wheel in the past 30 days. The survey included questions on how drivers perceived such behaviors as driving while impaired by drugs, alcohol, or fatigue; driving while distracted, and driving at unsafe speeds.

Drivers believe distractions are dangerous, but use their phones anyhow

There was little disagreement among survey respondents on the dangerous nature of distractions while behind the wheel. Eighty percent of all survey participants described texting while driving as a “serious safety threat.” Eighty-eight percent of drivers support bans on texting while driving, and 40% would support going even further by banning all phone use (hands-free or not) for drivers. That said, 31% of drivers admitted to typing a text or email while behind the wheel, and 40% admitted to reading a written message while driving in the past month.

In addition to driving while distracted, drivers admit to other risky behaviors behind the wheel that they know pose a threat. Almost 46% of all drivers admitted that they had driven more than 15 mph over the speed limit on the highway in the past 30 days; likewise, 46% had driven 10 mph or more over the speed limit in a residential area in the past month. Nevertheless, 88% of drivers find it unacceptable to speed in a residential area, and 75% feel this way about speeding on a highway.

Drivers who fail to follow the rules of the road aren’t just putting their own lives at risk; they’re risking the lives of everyone around them. When drivers cause accidents while committing unsafe and illegal behaviors behind the wheel, such as texting while driving or driving at a reckless speed, evidence of that illegal behavior can be helpful in a claim for damages. It can be challenging to prove that a driver was distracted by their phone when a crash occurred, requiring skillful use of available evidence such as surveillance camera footage or expert accident reconstruction. For this reason, hiring an experienced personal injury attorney can greatly increase your success on these types of claims.

If you’ve been injured in an accident in New York’s Hudson Valley, contact the knowledgeable and dedicated Goshen personal injury lawyers at Dupée & Monroe for a consultation on your case, at 845-294-8900.